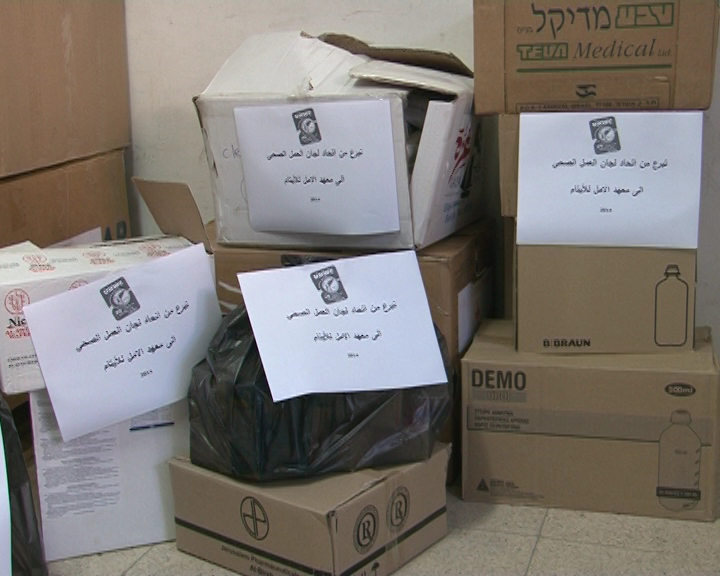 In the framework of partnership and networking with various local institutions, Union of Health Work Committees (UHWC) equipped a charity health clinic in Al-Amal institute for Orphans by providing them with medications and medical disposables, believing in the social responsibility towards our people in the Gaza Strip.

UHWC Executive Director / Dr. Tayseer Al-Sultan expressed the importance of complementary community work among the various local institutions, he added: “UHWC doesn’t and won’t hesitate to help children, particularly orphans through opening and equipping health charity clinics, that aims to provide comprehensive health care services, and we also give great attention and special care to those who have low income, knowing that 30% of the services of UHWC primary health centers and Al Awda hospital are free to the poorest and to whose with low income.”

In an interview with the Medical director of the charity health clinic, and the idea bringer/ Dr. Ghassan Hamad, he said: “We asked UHWC Chairman Tariq Abu Al- Khair, and UHWC Executive director /
Dr. Tayseer Al Sultan for help, and they expressed their cooperation and steadfast response, then we cooperated with UHWC warehouse Director / Yaqoub Muheisen in order to equip the charity health clinic at al-Amal Institute for Orphans, providing them with medications and medical supplies.”

Thus, UHWC warehouse Director / Yaqoub Muheisen said “Within the current difficult circumstances experienced by our people in the Gaza Strip, we took responsibility towards our children at Al-Amal Institute through equipping a charity health clinic with medicines and supplies”.

Union of Health Work Committees emphasizes the importance of integration between the institutions of civil society and refers to the need for coordination and networking to serve the largest possible segment of our people in the Gaza Strip, especially children orphans; understanding of the reality of bitter in the increasing number of orphaned children due to the recent Israeli aggression on the Gaza Strip that lasted 52 days, respectively….